Andy Jackson, Grounds Manager at Stoke City FC, has chosen a natural alternative to caring for the pitches at both the club's bet365 Stadium and Clayton Wood, the club's Training Ground and Academy.

Few sports can compare to football in terms of its global popularity with devoted fans spread far and wide across the planet. Consequently, there are few sports that have a larger carbon footprint than the beautiful game.

Pre-season tours in countries all over the world and teams in England flying short distances to away games obviously take their toll but stadiums and training grounds also have a huge environmental impact often requiring unsustainable levels of energy, water and raw materials.

However, there are signs that football is starting to wise-up to environmental issues with clubs around the world making efforts to become more eco-friendly.

"It was something I was thinking about for a long time before I made the decision to become pesticide and nematicide free at the stadium and the training ground," said Andy. "I'm really proud of how we have approached things, what we have achieved and how the staff have all embraced it. The last time we applied a chemical at the stadium was January 2016 and at the training ground it was July 2017.

"I think that a lot of people are thinking of taking the same route but they are 50:50 at the moment. If you really want to go ahead then I think you just have to be brave and jump straight in. There is no doubt that we still have some big challenges ahead but it is up to us to have the support and the products to combat these challenges."

Andy has been working with Amenity Land Solutions (ALS) for the past eight years and claims that the company has been integral to his new eco-friendly cause. In fact ALS Technical Manager Mark Allen, remembers the day well when Andy first mentioned his plans.

"I distinctly recall having a chat with Andy about biological and organic products all the way back in 2015," said Mark. "I remember him saying that he was really keen on creating a more environmentally friendly pitch but the demands of presentation were making him reluctant. These guys are under so much pressure to have the pitch looking the best it can be - especially with all of the televised games. However, there has been a real change in the last five years with the quality of products which are coming to the market. Now, with the right products in place, Andy has been able to achieve that all important presentation but by working much more in harmony with nature."

Over the past five years, Andy has treated the pitches using a variety of organic methods and ingredients while prohibiting the use of pesticides and 'manmade' chemicals. Finding the correct products for his project was no easy task and Andy admits that it was a lengthy process.

"We had to look at literally everything and then do a lot of testing," he said. "We've done some good trials, excellent trials, and there have also been products which just haven't worked but now we feel like we've got there. I spend maybe 25% of my time on research and trials and we have achieved our goal by using a good seed and natural products. 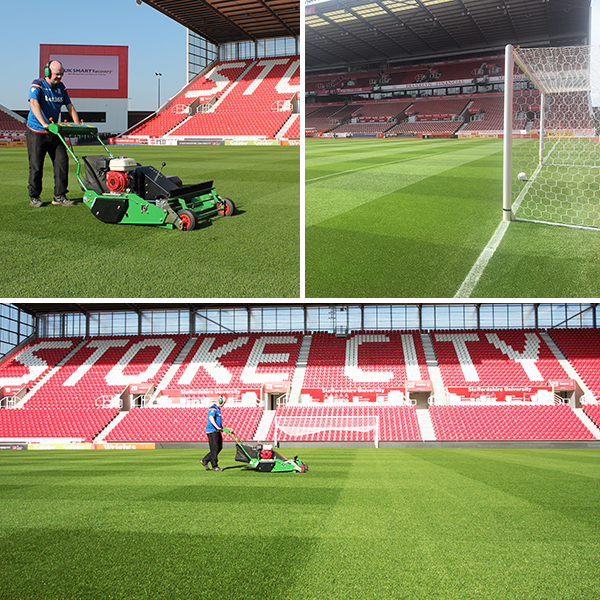 "The seed was the first thing we looked at," continued Andy. "We buy Limagrain MM60 seed from ALS because after trials I just felt that the MM seed was far superior to the other brands we were using. Since then we have been 100% MM60 over all the sites including the stadium - that's from renovation to over-seeding throughout the winter.

"The next part of the process was to look at products such as soil amendments and fertilisers and ALS have played a big part in that. We've now got a programmed approach in which we use Maxwell's BioMass Sugar, SeaAction Liquid Seaweed and HumiMax - which I think is one of the best Humic Acid products on the market."

HumiMax is a liquid humate product which is derived from a naturally occurring source. It operates both in the soil and the grass plant and the micronised formulation is highly efficient for foliar absorption, making it especially useful for tank mixing - which is exactly what Andy does.

Also included in Andy's tank-mix is Maxwell's Biomass Sugar which stimulates growth of both leaf and root. It is a unique natural formulation of sugars, macro nutrients and trace elements, approved as a bio-stimulant within the UK and used on many high-profile golf greens and sports pitches throughout Europe.

The third piece of Andy's 'bio-jigsaw' is SeaAction liquid seaweed, which benefits the tank-mix by helping to stimulate active soil microbes and maintain excellent turf condition. SeaAction is directly beneficial to soil structure and also stimulates fungi and bacteria, both of which are vital to soil health - making it the perfect tonic to reinvigorate turf after periods of stress.

"The Humic acid works incredibly well with the MM60 seed and plays an important role in germination and establishment. The seedlings are precious little things so when you are trying to grow in a pitch and are putting lots of water on it in high temperatures you are of course at risk of disease. Humic acid will improve the plant health and improve disease resistance. The sugars provide a critical Carbon contribution to the soil and the wider growing environment and then of course the seaweed comes into play."

Over recent years seaweed treatments have become incredibly popular, with many turf managers turning to them, and ALS's Mark Allen explained why.

"Seaweed obviously grows on a tidal line," he said. "When the tide goes out it is literally left high and dry, and when the tide comes in, it is completely submerged. It will be freezing cold in the winter and blisteringly hot in the summer, yet it can survive all of those extreme situations and still thrive. If we can sensitively extract all of those useful properties and impart them into our turf, the grass plant should be much better equipped to withstand stress events when they occur."

Andy claims that the tank-mix saves him an incredible amount of time, especially at the stadium, but when it comes to application rates he admits that he doesn't play by the rules.

"In terms of application rates we quite simply meet the demands of what the pitch wants," he said. "We no longer put down a set amount at specific times; instead we now work with the weather and the environment, and so if it has rained a lot then we will put extra products down, if it is at its peak then maybe we might not put as much down.

"When we started this process we looked at how we diet ourselves and grass is exactly the same. You can only take so much of one thing in and if you ate the same meal every single day then you would eventually fall down - therefore we are giving the plant a very balanced diet.

"We know what products we are putting on but we will tweak the rates to meet the demands for that specific day.

"The same can be said for disease because we tackle issues as they arise," he continued. "We will use various products such as calcium, iron and seaweed; depending on the situation and how severe the disease is we've got 7 to 8 natural products that we can look at.

"If we've had a disease outbreak, say on a Thursday night before a Saturday game, we have sprayed the pitch on Friday morning and we have seen natural products work faster than chemicals."

Andy may well have already achieved his goal of turning the stadium and the training ground into a pesticide and nematicide free environment, but he is under no illusion that there will be more challenges along the way.

"These are key products which are part of a wide range of products we use to piece the big jigsaw together," he said. "I'm a big believer in the fact that you cannot stand still even for just one day because what we are talking about now could totally change in less than a year's time. That is why it is important for companies like ALS to move at the pace of what we want to move at.

"But this is why I choose to work with ALS - and their parent company Maxwell Amenity. I think as an organisation they are in line with us; they want the best turf for all of their customers and like us, they are always looking to the future.

"We have been with ALS about 8 years and in my opinion it has been a great partnership for us."