Pistol: A Crucial Part of your Armoury Against Tough Broadleaf and Grass Weeds

Assist Support Services Group Contracts Manager for weed spraying operations, John Cook, has been involved with amenity weed spraying for 15 years, and he's been using Pistol® since it was introduced to the market. Over this time period John has working closely with John Riggall from Amenity Land Solutions (ALS). 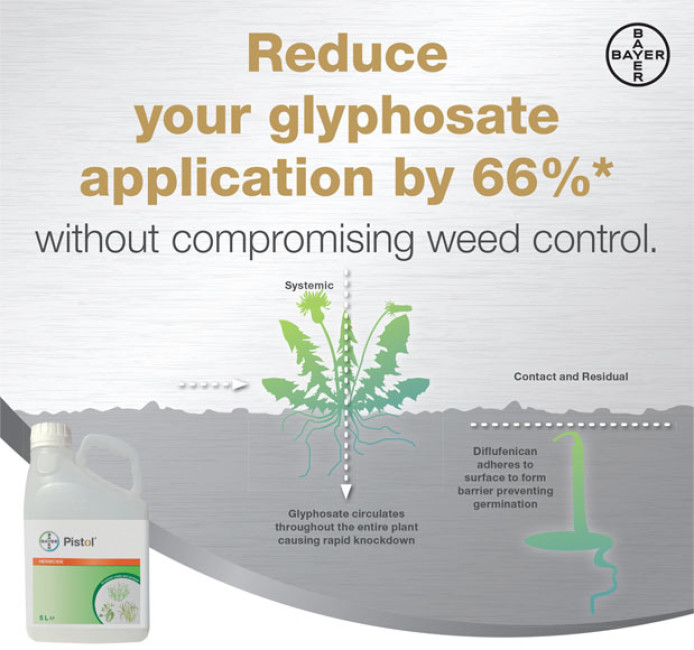 "I use Pistol on areas where a residual herbicide is required, where weeds are not wanted, such as gravelled areas, fence lines, but mostly for obstacle spraying," says John.

"We can't use it on hard surfaces, but on permeable, industrial surfaces it's a crucial part of our armoury against tough broadleaf and grass weeds."

When residual treatment is needed, in a suitable location, Pistol® is his first choice. "We've always found it good for the control of all weeds, especially grass weeds.

"The product is easy to mix, easy to apply, and it can be sprayed using a knapsack or quad-mounted sprayer," he says.

According to John, it's a very targeted control and this is why it's perfect for obstacle spraying, which is around lamp posts and signs that are on grass.

"We spray an eight to ten inch band around a sign post, for instance, so the mower can get close enough to it and so that it doesn't need to be strimmed.

As a mainstay within the extensive ALS product portfolio John Riggall has complete confidence in Pistol® for customers when residual weed control is required, such as Assist Support Services Group. John commented; "For many years Pistol® has been a big selling product, with customers returning year on year, confident in the control levels they will achieve from the combined total kill and residual action."

"Pistol® is easy to apply accurately. On the first year of application it kills off the grass, and the weeds around the obstacles, giving at least four to five months control. On the second year you can generally still see evidence of the previous year's application so typically we're just spraying off any new growth that emerges.

John treats at least 7,000 'obstacles' in grass, in the North West, for local authorities and councils. "If the location allows it, Pistol® is always the first choice for ultimate weed control," adds John.

Amenity Land Solutions (ALS) are an appointed distributor of Pistol and can be contacted on the below details:

John Riggall is the National Account Manager - Local Authorities, for ALS and can be contacted on the below email: