Maxwell Organic for the Origins of Rugby 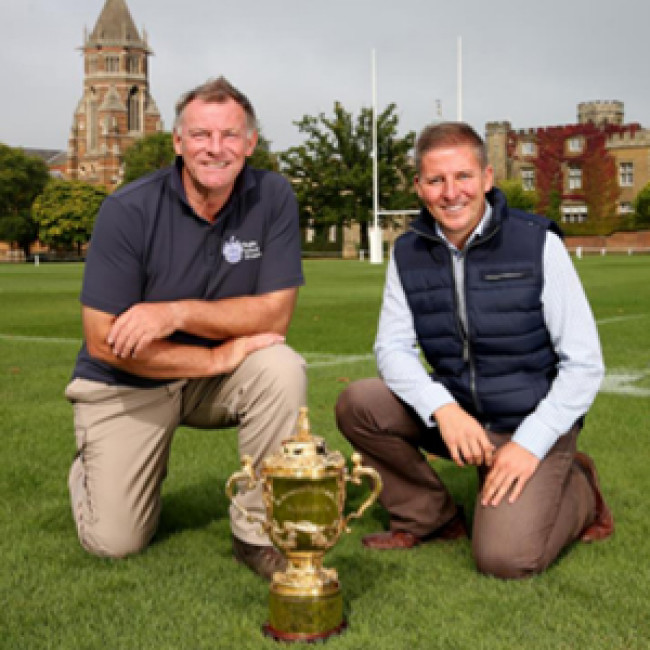 With the 2015 Rugby World Cup in full swing and Rugby School in the public spotlight, Head of Grounds at Rugby School, James Mead has placed his trust in the Maxwell Turf Food Organic range as part of an applied nutrient fertiliser programme to achieve high presentation standards on the sport's oldest pitch.

Rugby school is the home of the sport, which began in the early 1800's when student, William Webb Ellis, picked up a football and ran with it. Today with the evolution of a slightly different shaped ball and rugby becoming a global sport, that history ensures a constant queue of Rugby fans and tourists to the site, the original pitch remaining a key attraction for film crews, tourists, players and ambassadors of the game alike.

Since spring 2015 James has adopted an organic approach to the Rugby pitch utilising the Maxwell Turf Food Organic range.

"Early this summer we put great faith in the use of the Maxwell Turf Food Organic range selection from ALS. In conjunction with our Area Technical Sales Manager Mark Allen, a programme of turf and soil enhancement was started. The consistent use of Maxwell Turf Food Organo, BioniK combined with Bio-Mass Sugar and SeaAction Seaweed has delivered a response in the turf sward that has been exceptional for presentation, even growth, colour, density of plant with wear tolerance and recovery at the highest level. We have been filmed, photographed and visited from all around the globe this year, culminating in footage of the school at the opening ceremony shown to millions. I have no doubt we couldn't have been at our best without the benefits of the organic range.

James has worked closely with Area Technical Sales Manager Mark Allen to produce a nutritional plan to deliver a turf programme to meet the requirements of the Rugby School's pitches.

If you are interested in discussing a suitable fertiliser programme for your turf, including organic options contact ALS on 01952 641949 and request to speak to a Technical Manager or find your ALS Regional Technical Sales Manager.

Mark Allen is the Regional Technical Advisor for ALS based in the Midlands. Contact Mark on 07813 295147 or email markallen@amenity.co.uk.

Maxwell Amenity (the parent company of ALS) feature in the below produced video, highlighting how the Midlands as a region contributed to the development of Rugby as a sport and how this offers a positive impact to businesses in the region.

'Rugby - A Midlands Story' is a short documentary film from Iconic Productions. The film charts the heritage of the sport in the region that invented it.