How To Deal with Moss 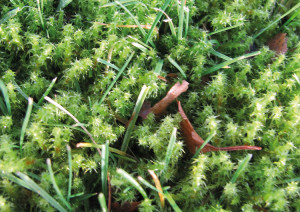 Mosses are plants that do not have a vascular system. They are part of the order called Bryophytes. As well as mosses, Bryophytes also contain the groups Hornworts and Liverworts. After flowering plants and ferns, mosses are the most diverse form of plants, with over 10,000 species in more than 700 genera; nearly twice as many genera as all the mammals on Earth. In addition to not having a vascular system, they also have no woody parts. The lack of a vascular system makes them susceptible to desiccation and, therefore, they tend to be found in damp, moist and even aquatic habitats, although not exclusively, and some species have remarkable adaptations to very dry habitats.

Moss can be a problem within turf, and the appearance of hard surfaces, such as patios or tennis courts, can be compromised by mosses. These two areas need to be considered separately, as they require different solutions. Identification Mosses require a different solution to liverworts, therefore it is useful to see what characteristics differentiate the two groups. 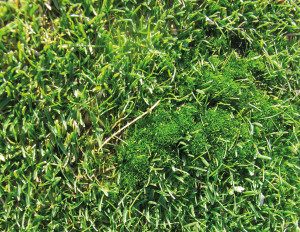 Mosses are divided into two distinct forms; pleurocarps and acrocarps. Acrocarpous mosses are usually unbranched or almost so, and have an erect habit, like small trees. An example of a common acrocarp is Silvergreen Bryum Moss (Bryum argenteum). This is commonly found on acidic soils, grasslands, woodland rides, soil banks and waste ground, and is notable for its large (3.5-5mm long), cylindrical, drooping capsules, which ripen in spring and summer, and are borne on a reddish seta (stem that supports the capsule) up to 3cm tall. Acrocarps are never regularly pinnately (fern-like) branched, but have a central stem and leaves coming off that stem. Almost all pleurocarpous mosses are freely branched, often either pinnate or chaotic. They frequently form dense intricate mats of elaborately branched stems. A common garden moss is Rhytidiodelphus squarrosus, so named because of the squarose nature of the leaves which bend back upon themselves. Liverworts are split into two groups, leafy and thallose. Like mosses, leafy liverworts have stems and leaves, but the leaves are arranged differently on the stem, often with two leaves placed laterally and a row of smaller 'underleaves' below. Thallose Liverworts don't have recognisable leaves and stems, but consist of a prostrate, flattened, strap-like or branching structure called a thallus. Methods of control on a hard surface such as tarmac Regular brushing with a stiff brush can help reduce the build-up of moss on a surface. However, once it has established, the easiest way of removing the moss is to use a herbicide. There are several available, such as MMC Pro, and Eco Chem Moss & Algae Killer. Application rates and preparation should be strictly adhered to in order to obtain effective results. Once the herbicide has been applied, the moss dies and will degrade requiring no further input. These herbicides should not be used on moss growing within turf. Methods to control moss within turf 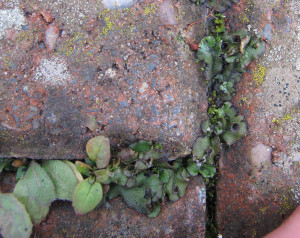 Moss becomes abundant in anaerobic situations where the grass is not growing vigorously; where soil is compacted, or does not drain freely, the grass may have been scalped, the area may be shaded or the nutrient status of the soil may be depleted. This situation can be alleviated with aeration, generally undertaken in the spring or autumn when sufficient warmth and moisture are available to enable the grass to repair. A typical renovation will involve applying a moss control product, such as Jewel, a herbicide that will also control certain broad-leaved weeds, or a sulphate of iron based product often as a soluble powder, within a fertiliser or as a liquid. Ensure that the moss is damp, not wet through, but able to absorb the fluid being applied. For moss control, ensure water volumes are high to ensure good coverage and enable the fluid to move over the leaf surface by capillary action. It is advisable to rinse out the sprayer thoroughly as soon as spraying is complete, as the iron will degrade any metal surfaces it comes into contact with. Iron does not mix well with many products, and it is advisable to 'jug mix' any products before attempting to apply them. Once the moss has died - yellow/brown with herbicide or black and breaking up if treated with iron - it should be thoroughly scarified out of the surface. In areas that have been neglected for a while, moss can be the dominant species and, in these situations, the amount of moss that is pulled out of turf can be staggering. It is then important to stimulate the grass with fertiliser so that it can respond and fill in the area that was occupied by moss. It may be necessary to overseed grass seed into the sward to provide vigour and assist in the recovery of the sward. Topdressing may also be required to make certain that the seed is in good contact with soil. Soluble iron is the most economic way of blackening the moss in order to then scarify out, but this should only be undertaken if sufficiently vigorous conditions exist for the grass to compete against the moss potentially re-infesting. Another alternative is to give the grass a little encouragement, with a low analysis fertiliser that also contains the sulphate of iron required for moss control: Iron Universal or Greenmaster Pro Lite Iron. Once the grass is growing vigorously, it should continue to out-compete the moss, providing a regular maintenance programme is followed.